KIFAD telecentre Introduce use of ICTs in its community 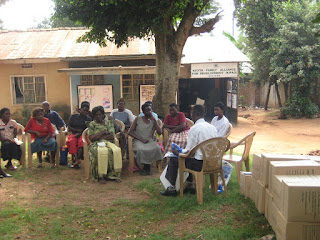 Kiyita Family Alliance for Development (KIFAD), a community based non-profit organization in Nansana Town Council, Wakiso District Uganda operates an offline-driven telecentre with a focus on families infected and affected by HIV/AIDS. Noting a deficit of information and poverty among families in the Wakiso area, a few families came together to work to rid their community of these evils, thus the formation of KIFAD telecentre.

The telecentre is equipped with four computers with CDroms, a photocopier, digital camera and lots of paper content including books, brochures, posters, pamphlets. The telecentre is run by the programme manager who oversees all the activities undertaken and a group of volunteers who are always on hand to research for information beneficial to the families under the telecentre program.

The telecentre takes on an intermediary role in connecting HIV/AIDS support organizations with the people in the Wakiso community. These include;

A donor's experience supporting one of KIFAD's HIV/AIDS projects

A volunteer's experience working with KIFAD

Submitted as an entry to the telecentre.org Blog Contest.