February 03, 2007
Just before the end of january, 26th to be exact, Mark van den Bosch and Arjan Doeswijk of yes-africa, were on a visit to East Africa. Joseph picked them up from the Akamba bus station, in Kampala - Uganda.

It was nice to share a barbecue with these guys last summer in holland and again meet them here once again. There talk is so much characterised with the energy that they hope is going to take africa out of poverty - energy from jatropha. Jatropha, is a plant commonly so popular with vanilla growers. Vanilla uses it as a support to reach sunlight, since its only a crawling plant.

Just before they arrived, a month back, they had sent it a modified generator that uses both diesel & biofuel (sun flower oil, cooking oil, jatropha oil, etc). So their visit to our centre in Karagwe, was to forge a way forward for the jatropha business & also get the generator set for power generation in the area. The generator is really heavy, weighing about 1,130 kg & capable of producing power of about 30 kilo Watts. 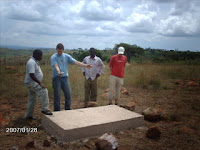 Mark demonstrating on how he would like to see the biofuel generator fitted onto the permanent concrete block. From left to right: Joseph sekiku, Mark, Salmon (site mason) & Arjan. 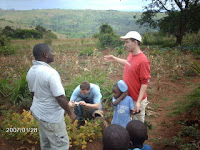 On the right, Mark & Arjan trying out jatropha in the field, down in a typical jatropha garden with Sekiku at the Eden Centre, Kyanyamisa - karagwe. 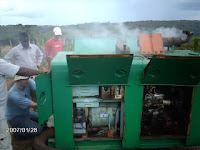 The white smoke coming out of the exhaust pipe of the bio-fuel generator. This was just below we blew the pre-heating fuse on it.
It took us plenty of time to get it to start, about 2 days, giving up in the end, pretty much frustrated. The starting motor gear teeth couldnt fully engage with the teeth on the engine and therefore, the engine would not start!

Well, we had a nice time after that, among which was a visit to a vanilla/jatropha farmer in Bukoba, visit to Jos en Lineke guest house in Mugana and finally, having a pretty nice pizza at Bart's campsite at the lake victoria beach, bukoba!