Ooh, its taken my quite sometime to update you on how we spent the past week on using "dead" computers. The participants on the very first day, were interested in changing the theme of the workshop, especially on substituting "dead" with "computers without hard disks" The argument was that, the computer was not completely dead - the rest of the other parts are working (or must be) for it to be used as a client anyway! But according to Joseph, "dead" is used as a "catch word", makes the listener think a little more about the subject.

Delegates from Uganda, Tanzania, holland came in to have first hand info on setting up and using dead computers. We missed the company of colleagues who had promised to attend from both Rwanda and Burundi. Among the participants was Ahmed Ndaula of Ugabytes Initiative, based in Kampala - Uganda; Kisembo & Steven from Kasese, Uganda; staff from Kibengwe telecentre, bukoba - tanzania and representing IICD, Bernadette Huizinga. 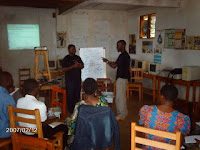 On the first day of the workshop, Joseph (left) and Ahmed (right) giving a program layout of the week-long workshop. Participants are also introduced to the computer terms such as "thin clients" and why not "big clients"; why use a "dead" computer when you get a "living" one? ;) 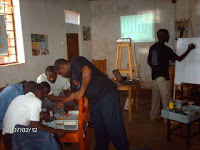 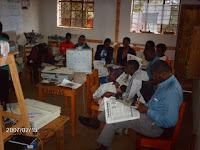 The new issue of the telecentre times was also introduced to the participants. The telecentre times is an east african forum where telecentre managers share experiences on challenges and successes on how they are bettering their rural telecentres. The story of the 8km link from our telecentre to a secondary school in our community, has been published in this paper as well. 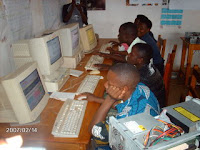 The participants getting a "feel" of using dead computers. After setting up a server using suse 9.1, floppy images for the particular network cards from rom-o-matic.org website, ltsp files and dhcp, the clients were ready to boot on the server. In total, we had 8 clients fully working on one server by the last day of the workshop. 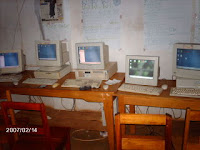 A closer look at the suse clients after being setup. It was sweet reward for a long week's work. The participants were excited at having to use dead computers and most of them promised to set up a similar project at their telecentres. We all came to a conclusion, that most information telecentres do have computers that only have the hard disk as a faulty component whereas the rest is in perfect working order. These are perfect for acting as clients in a "server-client" relationship. 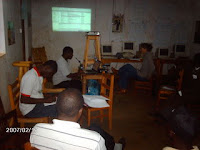 Having Bernadette launch and officially close our thin-client workshop on saturday, 17th feb, was great after waiting for her to come over for a couple of days. We could not cap it all without having a video & chat conference with Peter Kremer, via skype. 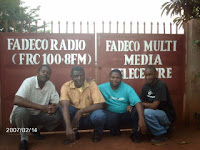 Pictures, always so nice at the end of workshops or meetings, and this was no different. And what best place than to have a nice picture showing exactly where the workshop was held! From (L-R): Steven Katsimbura, Kisembo John Baptist (Kasese, Uganda); Joseph Sekiku (director), and john (author).

We really had a nice time throughout the whole week, making new friends, and working so closely together but it was a time also to share skills on anything you can imagine especially when different people come together. From computers to music, scholarships, networking, etc