With more than 1200 registered participants from over 82 different countries spanning 5 continents (with over 70% from Africa), 40 exhibitors and sponsors, 12 countries and 308 speakers and chairpersons from 55 countries, eLearning Africa 2007 has established itself as the conference on ICT for Development, Training and Education with the largest international audience worldwide, providing insight into what is going on in the ICT supported education and training sector in Africa.

The 2nd consecutive annual event which took place from May 28 - 30, 2007 at Safari Park hotel Nairobi – Kenya, offered an extensive programme, with 308 speakers from 55 countries taking part in plenary, presentation and demonstration sessions, as well as panel discussions within 57 themed sessions and 17 pre-conference workshops and seminars.

The main focus of the conference was on ICT for development, training and education, which is a core component of the development plans of most African governments. ICTs are being integrated into many national educational systems in order to reach the Millennium Goal of "Education for All".

Education was given a special emphasis in the programme, which included a wide range of topics, such as eLearning in medical education and the fight against HIV and AIDS, mobile learning, open source and open content, as well as eLearning in schools, higher education institutions and in the public sector.

The speakers include representatives from major development organizations such as UNESCO, UNEVOC, the Global Development Learning Network (GDLN) and the World Bank, as well as national and governmental institutions, mainly from Africa but also from Europe, Asia and North America.

eLearning Africa is an annual conference organized by ICWE GmbH and Hoffmann & Reif. 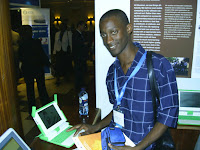 john, using the "One laptop per child", OLPC computer inside the conference exhibition hall. I wonder why they do not call it "one laptop per person" and go ahead and manufacture several for everyone in Africa. This would quickly bridge the digital divide, or what do you think?!

- Having most of the big IT firms attending and exhibiting at the conference, we could still not broadcast the 3-day workshop on the Internet! We had all the big bandwidth satellite dishes on display but none could even broadcast event programs, videos, etc either on a LAN, Internet or TV!

- With all the networking, new friendships, ideas generated at the conference, no platform is in place to continue the sharing or discussions unless on a private initiative. A mailing list, discussion board, forum, blog etc could have been setup yet web 2.0 was a major topic as well on this international conference!